Have you ever wondered what happens behind the infamous theater curtain? If you’re curious about the people beneath the characters, the chaos to get the set, costumes, and people in their places before the curtains open again, stick around Repertory Philippines third play this season—The Dresser. 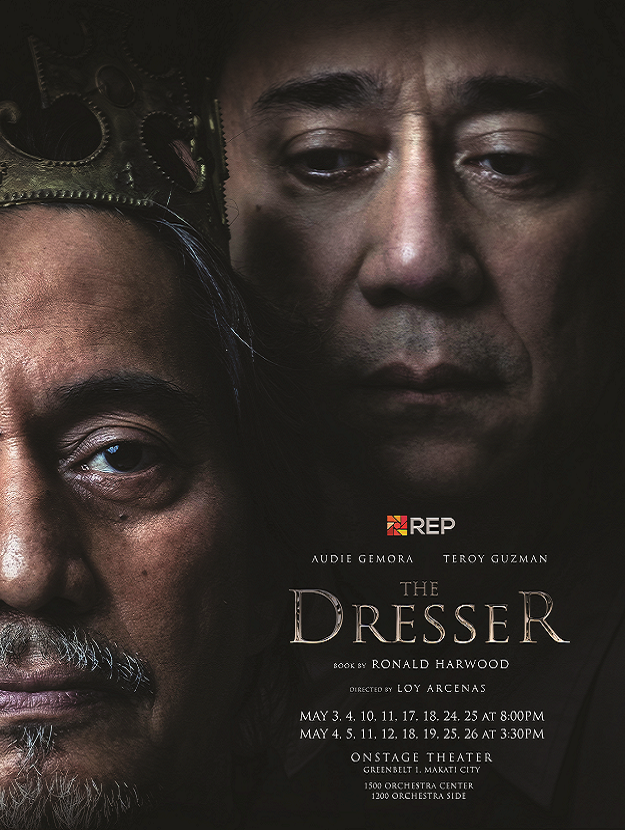 The Dresser tells the story of a troubled thespian who only goes by the name "Sir" and his loyal dresser Norman. The play takes place during a wartime production of a theater company’s play entitled King Lear. Sir, who plays the main character of the play, arrived in a rather irritated state. Norman does all he can to keep the play going even if the company itself has had enough of Sir's behavior. The company holds its breath as the delusional (almost in a Dementia-state) Sir steps on stage. Meanwhile, Norman and the other characters question whether their dedication to the theater—and even the people they love—is worth the hardship and heartbreak.

With its play-within-the-play concept, The Dresser takes the audience to what goes on behind a theater production. It’s a play for those who want to find a reason to keep their fire going whether it’s a passion project or a day job.

The Dresser stars notable veteran actors, Audie Gemora and Teroy Guzman, whose experience in being part of Shakespeare plays fits them right in this classic play. The play is directed by Loy Arcenas whose movie musical Ang Larawan, won Best Picture at the 43rd Metro Manila Film Festival. This is his first directorial debut at REP. Joining the main cast are Missy Maramara as Her Ladyship, Tami Monsod as Madge, Justine Narciso as Irene, Jaime Del Mundo as Geoffrey, and Jeremy Domingo as Oxenby.

Catch The Dresser from May 3 to 26 at the Onstage Theater in Greenbelt 1. Tickets are available by calling REP at 451-1474, Ticketworld at 891-9999, or by logging on to www.ticketworld.com.ph

Four Ways to Tell if the COVID-19 Article is Fake