Are you planning to get away this Holy Week break? If not, why not try to explore Manila by doing Lenten traditions?

Metro Manila and its surrounding regions is a nest of churches rich with history and heritage. Given the Philippines is a predominantly Catholic country, finding seven churches to complete your Visita route won’t be a sweat.

Why not put a twist on this year’s Visita Iglesia with different themes enriching not only your spiritual self but also your adventurous side?

Beyond skyscrapers and billboards, Manila is a treasure trove of beautifully structured churches inspired by colonial architecture. Fill your soul with spiritual devotion and creative inspiration with these churches.

The Walled City of Intramuros is full of historic landmarks and the perfect location for your Visita Iglesia—the city is the location of the seven original churches in the country during the Spanish era. The Department of Tourism and Intramuros Administration opened the city last year for a complete Visita Iglesia experience since World War II. Stations of the Cross will be placed in the stretch of General Luna street for devotees, and a Cenaculo will be staged in the Plaza Roma grounds. 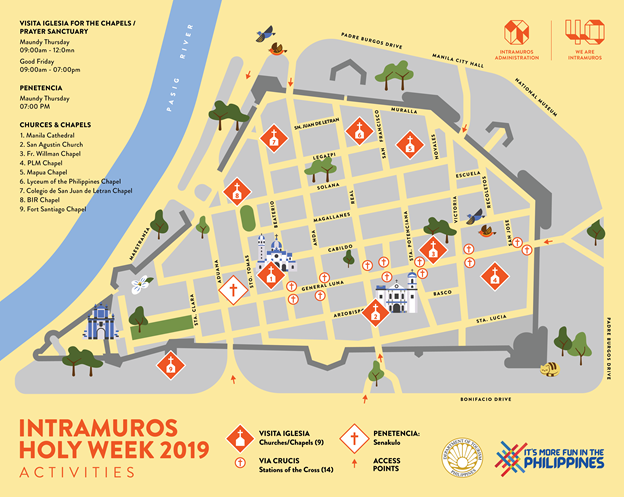 Aside from popular universities in the area, the University belt is also a nest of beautiful churches you can easily maneuver for your Visita Iglesia traditions.

It’s a refresher to commute or drive around the city during the Holy Week break. Take advantage of the quiet streets and explore the unusually crowded city while also observing the Visita Iglesia tradition.

The South is a Visita Iglesia favorite of many because of its beautiful and miraculous churches. It’s also the perfect destination to have a post-Visita Iglesia dinner with many tourist spots and favorite restaurants in the area.

The North also offers beautiful and miraculous churches to spend your Visita Iglesia penance. But compared to the South, the North route offers more pilgrimage churches and shrines to see.

Many devotees flock these Catholic churches known for their alleged miraculous manifestations and history according to some devotees and parishioners. There’s no harm in trying, so why not make a day out of it. A mini road trip from North-South or vice versa will complete your unique Visita Iglesia.

If you’re planning on doing a Visita Iglesia this Maundy Thursday and Good Friday, remember to abide by the Church’s rules and stay hydrated under this summer heat.

How Our Favorite Filipino Street Games Shaped Our Adulthood

Here Are The Strengths You Need to Impress Your Future Employers